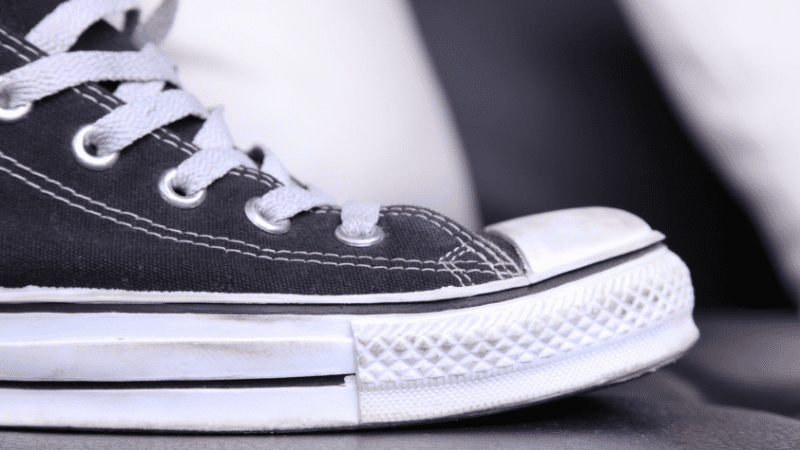 Chuck Taylors: Are They Really the Best Weightlifting Shoes?

Chuck Taylors are your best bet for gym shoes

Bro, do you even lift?

You’ve started on a basic 5×5 program, chug raw eggs a la Rocky Balboa and snort protein powder during each of your many pre-workout-fueled piss stops.

I’m sure you also have all the supplements, straps, supports, chalk and whatever necessary accessories to get your gains on.

But there’s still one thing missing. An appropriate pair of pumped up kicks.

Why Chuck Taylors for weightlifting shoes?

The idea here is that you want your feet to be as flat as possible for your compound or full-body lifts. Essentially allowing you to push yourself (and the weight) through the floor.

In my experience, doing deadlifts in modern-day running shoes is akin to deadlifting on top of a mattress. I spend more energy trying to balance instead of focusing on proper execution of the lift.

Furthermore, shoes with improper arches and shocks can absorb your energy and place you in unnatural alignment. This can leave you vulnerable to loss of power and potential injury.

For a squat or deadlift (or any lift really) I like to imagine that I’m pushing the earth away from me, rather than fighting gravity.

Give this little mental trick a try and see if it doesn’t make a difference.

Of course, the hardest of hardcore gym bros will swear by the barefoot method, which I actually prefer too.

The only problem is I live in California. And despite what you see on overly-edited Hollywood movies, this state is actually fairly filthy.

In fact, in many places, it’s absolutely disgusting. Many gyms around here even seem to double as homeless shelters.

That being said, there’s no way I’m putting my bare feet on a SARS-stained floor that likely hasn’t seen a mop in decades. I’m also not too keen on picking up some third-world disease that even modern medicine can’t cure.

So how did I solve for the flat foot problem without breaking the bank or picking up a flesh-eating fungus?

After digging through online bodybuilding forums, I bit the bullet and bought a pair of Chuck Taylors.

And I haven’t looked back.

Also known as Chuck Taylor All-Stars, Converse All-Stars, Chucks, Cons, and “All-Stars. This shoe was initially released in the early 20th century as a basketball shoe.

Since then, market share has greatly declined as basketball players have opted to sport other shoe brands.

However, they have managed to remain popular throughout pop culture as casual shoes.

Chuck Taylors have also remained virtually unchanged since their inception, a nice detail for those of us dedicated to eliminating unnecessary shit from our lives.

Are Chuck Taylors in your gym bag?

When it comes to lifting, you really don’t need to go fancy with your feet.

I remember back to my pre-training days of “exercising”.

In fact, you wouldn’t catch me dead without sporting the latest super-sole, bullshit-infused, shock-absorbing shoes. The same shoes that some marketing agency told me actually made a difference.

What I didn’t realize is not only are these products of Chinese child labor and grossly overpriced. But, they can also be detrimental to lifting properly.

Once I decided to stop going to the gym to “exercise” and started taking my training seriously, it was also time to step up my footwear game.

Serious weightlifters embrace the simple design of Chuck Taylors for a handful of reasons:

I bought a pair of solid grey, low-top Chucks on clearance for $30. And they’ve lasted me for years.

I chose the light gray color so I could wear them casually outside of the gym as well. The low-cut version also works wonders for the mobility of my previously-injured ankle.

Hell, I’ll even strap on my Chuck Taylors for cardio too. There really is something special about flat shoes that are perfectly formed to your feet.

Of course, that is after you break them in.

Which brings me to the ugly…

After years of many sweat-soaked weightlifting sessions, my Chuck Taylors have finally split at the soles and have been retired.

With deadlifts looming, I sought out to replace my soggy, stinky, former footwear. Naturally, the logical choice was another pair of Chucks.

So, I hopped on down to the nearest Converse outlet store and scored a pair of classic, high-ankle, black, Converse Chuck Taylor All-Stars.

And I couldn’t be happier!

Not everything in life can be all gold. There’s certainly no exception for the Chucks.

I had remembered wearing chucks as a kid. And for the life of me, could not remember why I ever stopped.

Well, I was immediately reminded when I slapped on my first adult pair of Chuck Taylors.

I left my house for a long walk to break these bad boys in. About halfway through, two bloody ankles, painful blisters and possibly multiple bone spurs later, I was reminded that Chucks will also break you in.

I was still a few miles from my place and had left my wallet at home. So, I hastily limped back at a pace that allowed me to maximize speed while also reducing the chance of hacksawing my shins.

Upon returning home, I removed my blood-stained All-Stars and swore to see this time through. Unlike my failed childhood Chuck experience.

After a few weeks of applying double socks and duct tape to my blistered ankles, my Converse eventually broke in. They now perfectly fit my feet.

And the blood? It just adds character to the shoe and lets fellow gym bros know I’m not in there fucking around. I came to put in work.

Like a good baseball glove. Once broken in, Chuck Taylors will literally last you a lifetime. And they just get better with age.

In fact, they feel like I’m wearing nothing at all.

UPDATE – My new Converse Classic Chuck Taylor All-Stars are high top and made of a lighter canvas material so no painful break-in period was required.

Grab a pair of Chuck Taylors for weightlifting

Looking to shell out $200 for some high-heel, sole-arching shoes stamped by the name of some has-been?

Consider a pair of timeless Chuck Taylors for your weightlifting needs instead.

Once you make it through the initial break-in period, you’ll be glad you did.

Disclaimer: Not guaranteed to make you run faster, jump higher or embody Benny (The Jet) Rodriguez level of Beast-slaying badassery.