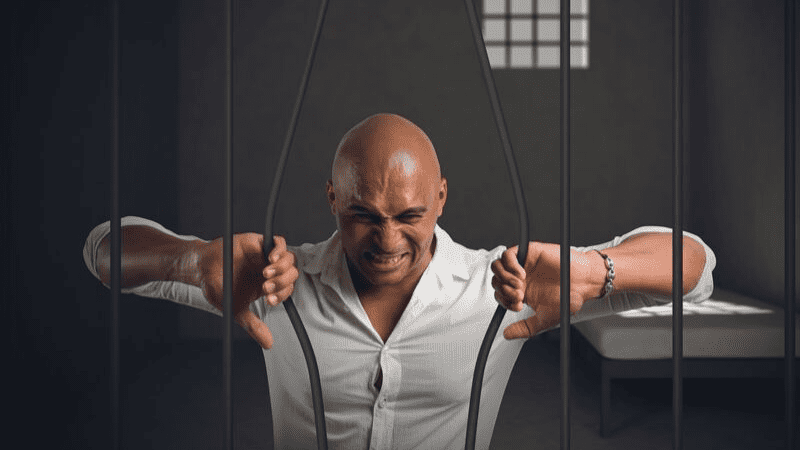 Friendship Test: Would You Bail a Friend Out of Jail?

Ever have a date bad enough you’ve needed a friend to make a fake phone call requesting bail money? For me, what started off like a nuclear end date option eventually turned into the ultimate friendship test.

Everyone’s aware of women using a fake emergency phone call to save them from a bad (translation: she’s not attracted to you) date. Back in the day, my buddies and I would employ a similar method.

Her: Omg, you won’t believe what happened! [Insert friend she doesn’t like] said [insert something she’s insecure about] to [insert someone she wishes liked her] making me feel like [insert random emotion]…

At this point, I text my buddy the cue to call or better yet, have a fake phone call app installed that I’ve already preprogrammed to save me. If the interaction is going well, I ignore the preset call time, if not. Answer.

In a typical case, I pick up, continuing with the uh-huhs as I greet my friend on the line. I continue to listen to my friend for a few seconds before completely cutting off the date.

Me to Friend: HOLY SHIT, no fucking way! Dude, I’m on it.

Me to Date: Babe, you’re not going to believe this. [Insert bro name here] just got arrested!

Time to bail on your bad date

Obviously, since you’re a good friend, this is an immediately effective nuclear option to end the date. Since you have to, you know, bail your buddy out and all. (Translation: Ditch the bitch and meet bro for beers).

In reality, your friend is the one bailing you out of a bad situation.

To be honest, I’ve only seen this option used a couple of times and it was my friends who would execute the plan.

But, it would always get me thinking… If this were a real-life scenario, would my bros actually bail me out?

My friend is in jail and needs to post bail

Since I’m not a complete degenerate fuckup (in my adult life), I’ve never gotten to answer this question first-hand. Until a real-life situation happened to a friend.

It was a Friday night and I was at home with the company of a lady friend when my phone started blowing up with notifications.

I look down and see it’s a group chat titled “Fags” that’s making all the commotion.

I take a peek, figuring one of the guys just knocked off a new THOT and already have my typical “Good work + thumb’s up emoji” response ready to deploy.

However, this time around it was a “Hey, so-and-so just got arrested, it’s serious, give me a call”.

As it turns out, this particular friend made the fatal mistake of sending his ex-girlfriend flowers. After she dumped him and booted him from a condo he’s paying for.

Sound criminal? Of course not.

But, that’s not the case when you’re talking about your typical American gutter slut.

Apparently, this strong, independent, sophisticated — according to her own words on her Tinder profile I came across within hours of the initial dumping — woman feared enough for her life that after receiving fucking flowers, she did what any strong woman would do.

Involve the government. Thus divorcing my friend from his freedom for the unforeseeable future.

True friends will bail you out of jail

The Friday night of everyone in group chat “Fags” suddenly turned into a fundraising event to save one of us from the clink.

Luckily, within hours we had pulled the funds together to cover the undisclosed bail amount. Our friend was free.

Aside from confirming how vicious many American women can really be, the experience showed how solid my friend group can really be.

Although we hang out less and less as we got older and our lives take us in different directions, when push comes to shove, the tribe steps up.

Friendship test: Why you should audit your friend group often

With some of my friend groups of the past, this certainly wouldn’t have been possible. But, I’ve spent years constantly cutting bar-only buddies, liberals, losers, welfare rats and professional victims from my life.

And replacing them with guys committed to getting their shit together and consant self-improvement.

The result? I am confident that if I were to commit a colossal fuck-up, my bros would have my back.

This wasn’t always the case.

I used to be the guy who hung out and with just about anyone who paid an ounce of attention to me. Never the “bad” kid per se. Just a shy teen who associated with losers from time to time.

Stop hanging out with losers

Turns out, losers do loser shit.

You know, the type of stuff you’d expect a typical loser to do. And I often suffered the consequences. Even when I was really just tagging along for a ride.

As an evolving man, I constantly consider if those I allow in my sphere of influence really serve me. And vice versa.

Let go of friends who are holding you back

Sometimes people outgrow one another as they forge their paths in different directions. That’s natural.

But many times, you’ll have to come to the stark realization that a lot of your friends are complete fucking idiots. And like crabs in a bucket, they’re pulling you down with them.

You are the average of the 5 people you hang out with.

I find it best to surround myself with people who have the same dedication to architecting a kick-ass life as myself.

Can’t stomach a steak or refuse to lift a weight? You need not apply. You’ve already failed my friendship test.

How to make new friends

Think back to when you were a kid. Who were your friends? Where did you meet them? Was there any sort of vetting or friendship testing involved?

When you really think about it, most of our friends are a result of proximity.

Childhood friendships are a result of proximity

I played with the neighborhood kids, went to recess with my classmates and eventually dated the girl who sat behind me in high school.

Did she sit behind me by choice? Nope, our relationship was the product of alphabetized seating.

As we grow up, many of us continue the habit of holding on to old friends. Usually out of comfort, convenience, and familiarity.

This works fine and dandy if your friends are all solid and travel through life’s ups and downs together.

In my case, most of my childhood friends were destined to go nowhere. And fast.

Over the years, I haven’t had to make many hard friend cuts, since most of us have naturally drifted away.

Adult friendships are also a result of proximity

When it comes to making new friends, it still really comes down to proximity. Even in the modern days of digital.

The proximity principle doesn’t differ much from that of childhood.

But in adulthood, you get to choose the environments you frequent. The places where you will likely meet your next friend.

How to screen potential new friends

Making a new male friend is not an easy task.

It’s not like online dating where you can pull random ass from a swipe app and seal the deal in an hour or less.

With most male friendships, there is an intentional or unintentional vetting process.

These are some red flags I typically keep my eye out for during our initial interactions:

Many of these symptoms are comorbid. For example, if you’re fat you’re also stupid, unhealthy, passive, and lazy.

Now, there may be times a friend temporarily experiences one or many of these symptoms.

The job of the friend group is to rally to quickly overcome these weaknesses. But, when anything on this list turns into or reveals a permanent character trait, it’s time to swing the ax.

Basically, you want to look for winners, not whiners.

Another friendship test: Would your friends bail you out of jail?

Although we’re examining the quality of your friends, it’s also important to note that your friends are a reflection of you.

Let’s say you’re a complete fuckup who keeps doing the same stupid shit over and over again. You shouldn’t be surprised if your friends finally give up on you and let you suffer your own consequences alone.

Now pretend you are of high character (which I’m sure you already are) and simply screwed up. Your friends are much more likely to rally for your freedom.

Why this is the ultimate friendship test

The idea of a buddy (or yourself) being bail-worthy is the ultimate benchmark to define a true friendship.

Bailing someone out is literally betting on them to show up to court.

Think they’ll skip out of the money and the country? You might want to reconsider your company.

So next time you’re reconsidering your friend group, try asking yourself both of the following friendship test questions:

If for any reason the answer is no, it’s time to make yourself some new friends, friend.