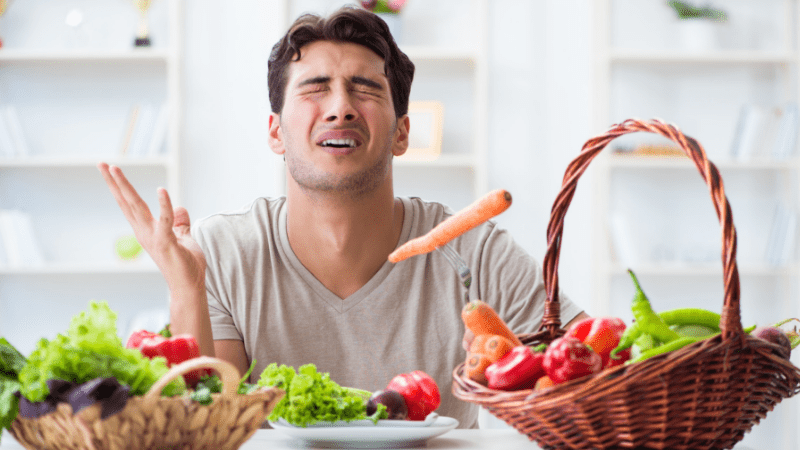 As an unabashed carnivore, I definitely feel to urge to throw a two-year-old tantrum anytime someone presents me with a pile of something that didn’t previously have a pulse.

But, there could be some benefits to force-feeding yourself some super greens.

The so-called “experts” state virtually any vegetable is good for you. Usually, I’d call bullshit. But, for the sake of science, let’s take a look at the top super greens for overall health.

On average, people who eat seven or more fruit or vegetable portions a day experience a 42% lower risk of dying from any preventable cause compared to those who eat less than one portion.

In a recent study, researchers analyzed 17 cancer-fighting nutrients to determine the most nutrient-dense fruits and veggies. They then assigned a nutrient density score on a 0 to 100 point scale (100 being the highest).

Ranked by this score, here are the top 10 super greens to kick your health into high gear.

This will also prevent you from looking like a slack-jawed moron next time you wander into the mysterious green abyss of your produce section.

This staple of soul food belongs to the same loose-leafed family as cabbage and broccoli.

Like kale, these green contain an enormous amount of vitamin K (388% DV per 100-gram serving). They are also extremely rich sources of vitamin A, vitamin C, and manganese and provide a moderate amount of calcium and vitamin B6.

Most commonly found in Southern US cuisine, collard greens can be enjoyed by anyone looking to experiment with healthy food options in their diet. For starters, check out this southern-style collard greens recipe.

Around since the time of the Romans, there’s a reason this deep-green, long-leaf veggie has stood the test of time.

The most nutritious of the lettuces, ancient Romans and Greeks actually used this lettuce for medicinal purposes.

Today, we now use the French word for Roman and know that Romaine lettuce hosts a variety of benefits. These include improving heart health and defending against harmful free radicals.

For those of you who’ve fathered or will father children, here’s a fun fact…

Known for its high folate profile and is highly recommended as part of a pregnant woman’s diet. Romaine lettuce also boasts high levels of vitamin C, beta-carotene, dietary fiber, vitamin B9, and potassium.

There’s much more to parsley than sprucing up your shitty culinary creation to try to impress a potential lay.

Who would’ve thought the go-to, trusty super green garnish that takes your microwave lasagna into a 5-star experience is actually healthy too!

As it turns out, cultures from across the globe utilize this versatile vegetable for much more than impressing the ladies. Around the world parsley safely takes residence in all sorts of sandwiches, soups, stocks, and sauces.

If you’re like me, you probably have a big-ass plastic container of parsley that you add to everything despite adding zero flavor. Revel in the fact that you also benefit from parsley’s lycopene and alpha-carotene as well as lutein+zeaxanthin and beta carotene.

Coming in at lucky #7 is the traditional lettuce we all know and love.

Aside from occupying the most real estate in your typical salad, good ol’ lettuce is also good for our good ol’ health.

No soup, salad or sandwich shop would be complete without the powerful punch of a vitamin A + vitamin K (obviously the K stands for knockout) combo that’s worked its way into the American diet for good.

If this vegetable (with a stripper-inspired name) were an ex-girlfriend, then she’d definitely be of the multiple personality (aka crazy) type.

Chicory has been used as a Native American medicine, Napoleonic-era coffee replacement, and even a toxic tonic to remove intestinal tapeworms.

Now that chicory’s wild-and-crazy days are over, this blue daisy now sits humbly at #6 on our list. Chicory isn’t particularly useful for any single specific thing. But, she does span the nutrition spectrum by offering small amounts of every essential vitamin.

Be sure to call on chicory when you toss your next salad for a mouthful of nutritional satisfaction.

Beware, she might leave you with a salt-and-peppery kick.

“I’m strong to the finish, Cause I eats me spinach”

Hands down spinach is the manliest of leafy greens. Hell, they were responsible Popeye the Sailor’s swole-ass forearms. It was even given to French soldiers in WWI to combat the effects of hemorrhage (along with some fortified wine).

A single 3.5 oz serving provides at least 20% DV of vitamin A, vitamin C, vitamin K, magnesium, manganese, iron, and folate. Even more impressive is that a single serving only clocks in at 23 calories!

Plus, although the experts try to tell us otherwise, those of us old enough to remember the cartoon still credit this salad sidekick with creating forearms of fortified steel.

Inspired by an alternative rock band from the Nickelodeon animated series Doug, these Goosefoot taproot greens offer a swath of rad benefits. They are a great source of fiber with plenty of protein, phosphorus, and zinc.

They’re also high in vitamin B6, magnesium, potassium, copper and manganese while being low in fat and cholesterol.

Studies have also shown the levels of K2 in beets can also deliver blood-clotting properties, prolong the onset of osteoporosis, work with calcium to increase bone strength and even help ward off Alzheimer’s disease.

This sharp, serrated and versatile leafy green is the Swiss Army Knife of vegetables. It’s commonly (and appropriately) known as swiss chard, since it serves so many nutritional purposes.

Chards are those gigantic red-stalked leaves that look like they’re straight out of a Cirque du Soleil version of Alice in Wonderland, are presumably poisonous and will most definitely kill you.

A single serving will give you a nice hit of vitamin A (122% DV), K (1038% DV) and C (50% DV). These shiny super greens with ribbed leaves deliver significant amounts of vitamin E, magnesium, manganese, iron, and potassium.

This “refined” vegetable is also quite delicate and perishes quickly.

For that reason, it’s best to buy chards fresh to be used right away in a chopped salad to achieve maximum nutritional benefit.

Cabbage is the culinary B-52 bomber whose nutritious force devastates type 2 diabetes, cardiovascular disease, and cancer. It’s mass-produced, seriously effective and stops the spread of disease quicker than nazism after an allied carpet-bombing campaign.

The 20 flavonoids and 15 phenols with antioxidant properties make this turnip a formidable foe for cardiovascular health disease. With polyphenols that combat oxidative stress and chronic inflammation, cancer doesn’t have a fighting chance once cabbage enters the scenario.

If polyphenols don’t do the trick, the glucosinolates found in cabbage deliver the coup de grâce to bladder, breast, colon, and prostate cancer.

Cabbage is easy to serve. I prefer to saute it with onions, mushrooms, and bacon for a quick nutritional side supplement. You can also stew or pickle cabbage to your heart’s (literal) content.

The oldest known leafy vegetable consumed by humans has stood the test of time and made it to the top spot of our super greens list.

A staple in the diet of Roman soldiers, Hippocrates (the father of medicine), even used it to treat his patients. Yes, this ancient green holds a treasure trove of health benefits certainly fit for a modern king or conqueror.

Watercress contains the most vitamin K, C and A, along with calcium, manganese, potassium, vitamin E, thiamin, riboflavin, vitamin B6, magnesium and phosphorus per serving.

Prepare watercress just like any other green to serve up a healthy helping of man-making nutrition.

Get your super greens today!

Consuming any nutrient-dense super greens on this list will lead to an overall decreased risk of obesity, diabetes, heart disease, and overall mortality while providing a healthier complexion, increased energy and leaner physique.

There’s really no reason to not enjoy the benefits of including a healthy amount of leafy vegetables in your diet.

Have you had your greens today?