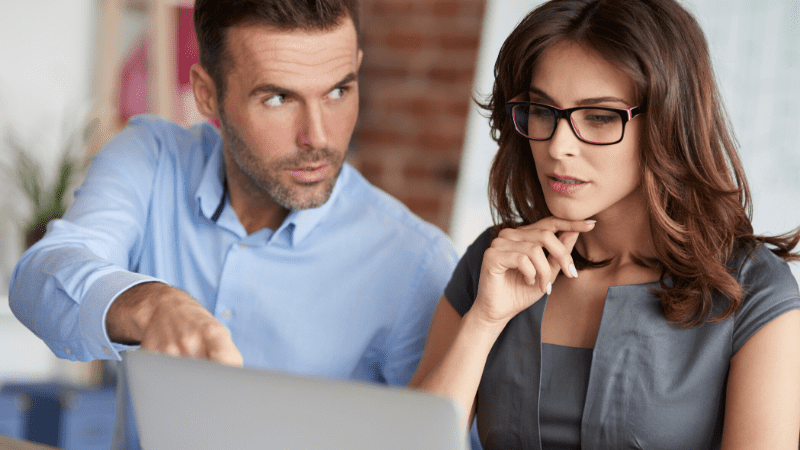 Men are Smarter than Women (According to IQ Tests)

What do you mean men are smarter than women?

Modern culture tells us men and women are exactly the same in all aspects. And if a woman doesn’t excel in an area men typically dominate, an invisible glass ceiling must be the reason.

But, since most people are lazy and stupid, they stick to the script of men establishing a system to keep women down. Or in the kitchen.

But, is there really a glass ceiling holding back female achievement? Or can an IQ test and some simple logic finally put the myth to rest?

You can probably guess by the title of this article that the answer has nothing to do with the fictional patriarchy. Women do not fall short academically, financially or professionally because men conspire to keep them down.

In fact, previous arguments like the gender pay gap myth have been completely debunked. Even by left-leaning publications. But, that’s a topic for another day.

It really all comes down to the many biological and evolutionary differences between men and women. For now, we’ll just focus on intelligence.

As proven in IQ tests, men are smarter than women. Or at least men have higher IQs, on average. We’ll get into why that’s important a bit later.

What is IQ and what does it have to do with intelligence?

Before we go too much further, we need to define intelligence.

In these areas of examination, men outperform women in each and every one. There is no moral judgment when it comes to these tests. It is merely a measurement.

An IQ test calculates a total score from standardized tests to assess intelligence. These tests use concrete or fixed measurements, like distance or mass.

An example question on an IQ test might ask a test-taker to view a series of numbers, letters or pictures and identify what does or does not belong in the sequence.

IQ test scores impact a number of factors such as social status, job performance, income, morbidity, and mortality. In fact, even hiring managers used to apply these tests to screen job applicants.

Obviously, IQ variances between different groups must be a sign of discrimination. If you don’t accept reality, that is.

Differences in IQ and types of intelligence in children

In childhood, boys and girls start out with about the same IQ test scores. Around the age of 16 boys begin to take the lead. This gap continues widening as both sexes age. By age 21, men, on average, display a 5-point IQ test score lead over women.

Girls naturally show more empathy and are more adept at “mind-reading”. Which I’m guessing were the words used by their young male classmates.

When a group of 6-year olds listened to a recording of a crying baby, girls were twice as likely to express empathy. Boys seemed more concerned with bereavement, separation, and maternal depression but denied loss or sorrow.

Overall, boys express more confidence in sports and mathematics while girls take the lead in reading and music. Interestingly enough, boys attribute failure to lack of effort, whereas girls cite a lack of ability.

There are more male geniuses and far more male homeless. This is a result of a larger IQ test score range for men.

In fact, at an IQ test score of 145 or near-genius level, men outnumber women by 8-to-1. Furthermore, men are represented 10-15x more on the highest measurable levels of intelligence.

However, this also holds true for those found on the opposite end of the spectrum.

In modern day-to-day life, there really isn’t much of a difference between a man with an IQ test score of 105 and a woman of 100. Where we do see differences is when we rise to the top of the IQ test scale.

As previously mentioned, this also holds true when we climb down the lower rungs of the intelligence ladder. Although women may have lower intelligence, they do not have the lowest. Men overall display a vastly wider range of intelligence.

So, not only are men smarter than women. They are dumber too.

Areas girls are smarter than men

We should not overshadow the fact that women do hold an edge when it comes to verbal reasoning. Tests show they definitely outperform men in foreign language skills and spelling.

Girls acquire language skills earlier than boys and are more fluent throughout life. This explains why women communicate with larger vocabularies and use more complex linguistic constructions.

Women are also as successful, if not more, than men at contributing to the arts and music. Skills which are not really assessed on IQ tests.

With these advantages in mind, it’s not surprising that university lecture halls or foreign language departments are over-represented by women.

This might also explain why men complain of their girlfriends or wives who like to “talk so much”.

Can evolution explain why men have higher intelligence than women?

The fact that men are smarter than women is merely a consequence of evolution. We didn’t always live in an age of Starbuck’s, reality TV, climate-controlled corporate offices and shopping malls.

For the majority of human history, we’ve lived against the elements of nature. As part of hunter-gatherer societies, men had to handle complex, life-threatening problems daily. Those who were able to overcome life-or-death challenges reproduced to create new generations of more intelligent men.

For much of history, and even in most places today, high-status males are more likely to mate with multiple women. Weaker men did not pass along their genes.

In order to achieve high status, these men needed to possess far sharper minds than those of competing males. Meanwhile, women engaged in simpler tasks such as raising children or gathering berries.

Anyone with a basic understanding of evolution is familiar with Darwin’s “survival of the fittest”. Of these provider men, only the smartest and strongest would go on to reproduce with the most fertile women.

Men may be smarter than women. But this is because women only reproduce with the most intelligent men, historically. Over time, I’m sure this will change. Especially because most modern women seem to get knocked up by complete dipshits.

Generation after generation, the cycle would repeat, leading way to the apparent changes we see between the sexes in terms of size, strength, aggression, etc.

Being the sole child-bearers, women were out of commission for the duration of their pregnancy and nursing period. Minus modern medicine, the chances of a child reaching adulthood were far less likely.

Therefore, producing multiple children was a biological must. Couple this with significantly lower life expectancies compared to modern times. Ultimately, women spent most of their lives consuming, rather than procuring resources.

In regards to size and strength, we see this played out physically. Men have definite differences in body size and muscle development compared to women. Once more, in evolution, only the strongest man would reproduce whereas the most fertile women would bear the children.

Another reason why men demonstrate higher IQ test levels has to do with hormonal differences between the genders.

Due to an increased presence of the male sex hormone testosterone, men are far more competitive, aggressive and motivated than women.

All a man’s hormone system cares about is succeeding, competing and conquering his rivals. Throughout human history, this has been a response to surviving in life and death situations.

On the contrary, even some of the most high-achieving women will admit to becoming distracted by their genetic predisposition to nurture. Many career women in their 30’s are shocked when they develop a “sudden urge” to bear children.

Brain differences may explain why men are smarter than women

Intelligence between the sexes varies because the brains of men and women differ. At a functional level, blood flows more to the right side of the male brain. While female brains produce more blood flow to the left.

Gray areas are localized information and action-processing centers in specific regions of the brain. This may explain why men might be described as having “tunnel vision” when they conduct a task.

White matter is the networking grid that connects other processing centers to one another. This difference could explain why women tend to transition between tasks quicker. Making them more effective multi-taskers.

Women often have a larger hippocampus, or memory center in the brain. Along with a higher density of neural connections into the hippocampus. As a result, they input or absorb more sensorial (of the 5 senses) and emotive information.

Combined with testosterone, a powerful driver of ambition and achievement leads to a not-so-mysterious explanation as to why men often seek more success.

This also explains why decades of anti-discrimination initiatives don’t lead to more women in STEM (Science, Technology, Engineering, and Math) fields or rising to the highest levels of intelligence.

Of course, boys and girls should receive the same educational opportunities. However, striving to engineer a society with a perfect 50:50 male-to-female balance in the occupations is ludicrous. Especially if it requires us to ignore biological, evolutionary and physical differences between the genders.

We must accept that the same opportunities do not produce the same outcomes.

When it comes down to nature, sometimes there are things that are simply out of our control. With regard to IQ, men are indeed smarter than women.